Edward is the coolest little Miniature Schnauzer that we have had the pleasure to work with and love for quite a while.  We took him to the Lake on August 7th and he had a ball.  Running around with his doggie friend and swimming in the Lake.

Edward is very loving who only wants to please.  He requires an Owner who will provide him  with focused guidance with clear expectations.  When Edward is a good boy, he looks up for a pat and a kind word.  He would love a home where his Owner takes him for daily jogs or walks as he is very athletic.

He has been Home Life trained where he was introduced to the car, doggies, people and stores.  Edward sleeps quietly through the night and goes outside for potty.

Edward was returned from a family who has 2 young children who were too rough with him (words from the Mother).

Here is a picture of Edward: 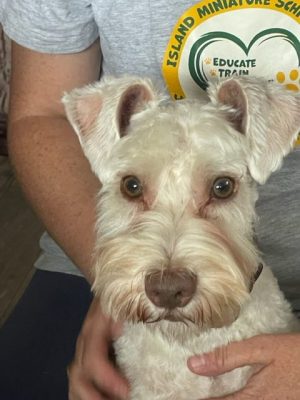 or search for chapter topics:

I am thrilled to announce that I have been trained by the Master International Dog Trainer, Cesar Millan.
I trained with him and his Pack Trainers at the Dog Psychology Centre in California, returning home with a spiritual awareness of how to work, train and love my Miniature Schnauzers with the “Cesar touch”.

To compliment our Diary Book series – found at this link: Diary , we now also have available our Doggang Farm Reality Show. This Reality Show is comprised of monthly Chapters. Each Chapter captures videos of puppy birthing; puppies playing; dog/puppy training and dog/puppy walk-a-bouts.

Remember Join Up, Be One and Have Fun

Pup/Dog of the Month

These are dogs that are part of our breeding business. They are not for sale.